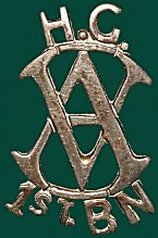 Home Guard Section
VERA also have a Home Guard section within the group. Always on the lookout for new members please see the "Join us" page for further details.

Formed in May 1940, what started out as the LDV (Local Defence Volunteers), or Look Duck and Vanish, became the Home Guard in July 1940. More commonly called “Dad’s Army” (we’ve all seen the TV show), it was an unpaid, part time volunteer force made up of men aged 17 to 65, although this age limit seems to have been stretched at times. Ranks were appointments and had authority in the Home Guard only. Between May 1940 and November 1944 (when the Home Guard was stood down), over 2.5 million men had joined, many staying until the very end.

The early LDV wore civilian clothes with an LDV armband and carried whatever weapons they could find, from shotguns to museum pieces and knives tied to broom handles! As uniforms and equipment became available, the Home Guard was kitted out – at first with green denim Battledress jacket and trousers and “Home Guard” armband worn on the right arm – later kitted out with serge Battledress worn with “Home Guard” shoulder titles and unit identification letters and numerals. Headgear was the Field Service cap (side cap) worn with the County Regiment cap badge. Webbing equipment and weapons were varied – the best going to arrears where invasion was feared most. 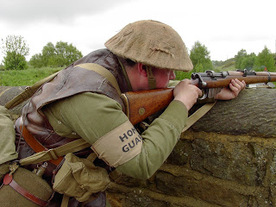 Many Home Guard units were formed and equipped by small companies, mines, shipyards and steelworks etc, adopting their own individual insignia, such as the Tiger badge of the Leicestershire Rifle Association.

Each member of the platoon has their own “history” to recount – for example, the Manager at the Vickers plant (and Platoon Captain) is Mr Hardly-Worthit. He has influence in high places (or so he thinks) and has acquired a number of P14 and P17 rifles from the USA together with a BAR (Browning Automatic Rifle). Mr Kennedy (is the Platoon Sergeant) and also the Shift Foreman at the factory. Private Anderson – the largest member of the Platoon is a lathe operator by day and in charge of the recently arrived Lewis gun – a heavy and cumbersome weapon. The rest of the Platoon is made up of men in reserved occupations, such as draughtsmen and engineers. The exception is Private Wishart, a veteran of the Sudan and the Great War who is retained by Mr Hardly-Worthit as factory handyman.

Home Front personnel are ARP, AFS, Rescue Squads, Police, Red Cross, civilians etc, authentically dressed and equipped for their chosen role. There is a wide variety of clothing options for the kids, either as uniformed messengers, or civilian clothes – kids tended to look like smaller versions of their dads, except for the short trousers, with plain leather soled shoes, long socks, plain cotton shirts, possibly a tie and school cap. Everyone carried a gas mask in its cardboard box, suspended on string. Women’s options are a bit more complicated as they had working dress and best dress. Working dress was usually an old dress with a piny (apron) over the top. Hair may have been tucked up in a cloth cap. The only way to fully understand this side is to read up on it, watch 1940s films for authentic styles and look at your mums/grans/great grans photos. There are some specialist suppliers in 1940s clothes and some hunting in charity shops may also help.

We hope that the Unit History gives you a better understanding of whom we portray. However, there is no substitute for doing some reading of your own and there are numerous books about the Home Guard and Home Front.

For more info regarding the Home Guard please contact Elliott Kennedy via email:- 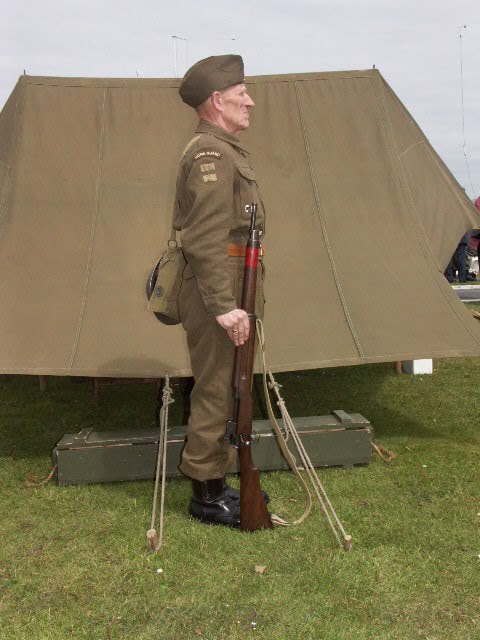